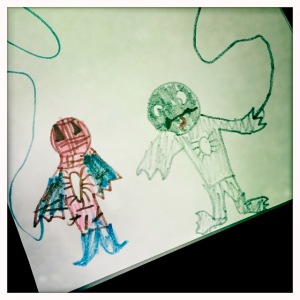 Who’s up tonight?
“Um, Wolverine. From the beginning, OK, Papa?”
OK. Wolverine was born a long, long time ago. He’s older than Grandpa’s grandpa.
“Where’s Grandpa’s grandpa now?”
He died.
“Why?”
Because everyone dies.
“I don’t want to die! …Will you die?”
Yes, eventually.
“Why?”
It’s natural. But it’s OK. We enjoy people while they’re alive.
“But why do people die?”
I don’t know.
“How do people die?”
In lots of ways. Sometimes just old age, but sometimes a disease, or an accident. Lots of ways.

“Papa?”
Yes?
“We’re both the same superhero.”
Really?
“Yeah, we both have many arms—soft arms to help people, and hard arms to fight bad guys. Listen!”
…What?
“Someone’s crying.”
Where?
“Somewhere. Stretch your soft arms like this, really wide.”
Like this?
“Now it’s OK.”
Will the person crying feel the soft arms?
“No. It just feels like a blanket.”

3 thoughts on “Notes from a Year Ago, After Putting Boy to Bed”