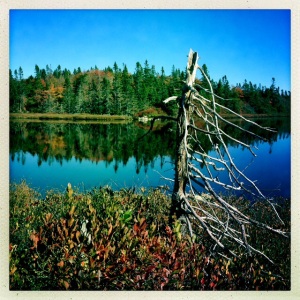 Ever since moving to Nova Scotia from Japan, I have noticed in myself a habit of seeing the features of Alaska, the place where I grew up. So there is the pervasive rock and water of this new place, but there is also a stretch of imagined snow-tipped mountains tracing along an expanse of blue sky.

I think it is the similarities that trick my brain into seeing what is not there. Sprawling forests of birch and pine, seagulls circling above dark and turbulent seas—how can this not be Alaska? So many elements are the same.

In Japan, I never saw the geography of my homeland, but I sometimes thought I understood when I did not. Or I understood in a way that was different from how others understood. Perhaps this was the cultural equivalent of my imaginary mountains. All that I had known before was the backdrop or overlay to my perception of everything that came after.

So, yes, I suspect those mountains point to something subtle that I cannot yet grasp. This is the obvious explanation of my current visual fallacy: a kind of culture shock. But it is also a reminder that both perception and time are slippery; all is in flux.

For instance, if I follow the arrow of time backwards, to the origin of the remembered mountains, I see that my memories now include some sense of my husband, of my children—and also of our arrival to this new country. My understanding of the past is set against all that came after. So those memories are altered but they feel no less true than when I experienced them in real time, or when I remembered them at different times in the years that followed.

In this way I am an embodiment of context—time and space and encounter—an entire landscape held in one small human form. Everything—even memory—is altered by memory. This paradox is truth. But it is not the only truth.

Because sometimes I look into vast blue sky and that is all I see. 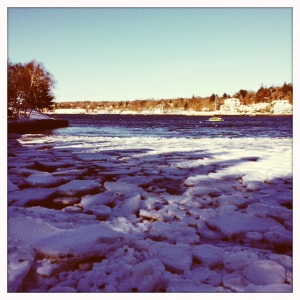 2 thoughts on “The Persistence of Landscape”