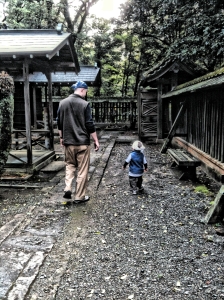 I’ve been reading Dzongsar Jamyang Khyentse’s new book, Not for Happiness: A Guide to the So-Called Preliminary Practices (great book), and early on, he says this:

The aim of far too many teachings these days is to make people “feel good,” and even some Buddhist masters are beginning to sound like New Age apostles. Their talks are entirely devoted to validating the manifestation of ego and endorsing the “rightness” of our feelings, neither of which have anything to do with the teachings we find in the pith instructions. So, if you are only concerned about feeling good, you are far better off having a full body massage or listening to some uplifting or life-affirming music than receiving dharma teachings, which were definitely not designed to cheer you up. On the contrary, the dharma was devised specifically to expose your feelings and make you feel awful.

Just replace “dharma” and “teachings” with “having kids.” I think this quotation is right on — spiritual practice, if it’s worth anything, shakes up your world. It can feel really bad sometimes. I don’t know if that definition always works both ways, but it does often. Experiences that challenge us, that break us down, that make us question everything: these are the real thing.

I’m pretty sure that nothing has revealed more about me, or the stories I tell myself about who I am, than having kids.  I thought I moved in the world with some degree of equanimity. Wrong. I thought I was a patient person. Not so true. If you’d asked me a couple years ago when I had last raised my voice at someone in anger and frustration, I would have said that I had no idea. Years, maybe. But if you ask me now, I remember. I’m still wearing the same shirt.

A central theme in Zen literature (and by extension, Zen practice) is “don’t know.” It’s a good thing, this not knowing. When you know exactly where you’re going, you don’t look at the road. Arrival is automatic, unaware. But when you’re lost — and you know it — you look at the world with open eyes. Nothing is obvious. Nothing is easy. From a Zen perspective, that feeling of being lost is a kind of honesty. It’s an honest response to the complexities of our lives. It forces us to really see, and to make decisions based not on some philosophy or policy, but on where we actually are.

But it’s not something we embrace. I have never known more about raising kids than I did four years ago, the day before our son was born. I’d read all the articles, combed through the books, thought through my own vision of what a good parent is. I’d seen the parents around me failing, and made lots of mental notes about how I would never, never sink so low. I was an expert. And I have never known less about parenting than I did the first time I held that little boy and he looked up at me. It was that dull moment of clarity that, if it were a movie, would be signaled by the camera zooming in on my face, eerie music rising. I had no idea what I was doing.

Four years and a little girl later, I still feel lost in that deep, endless way. I have never before been so receptive to other people’s ideas. When our boy started having full-on tantrums, I was willing to listen to even the craziest “solution.” I was, and am, out of my depth. I’m the younger brother; Tracy grew up as an only child. We came to this with no experience, not even much babysitting in junior high. Tracy and I are always mapping out little strategies, coming up with new policies, encouraging each other to stand firm on this, or to relax about that. But when I’m stuck in traffic, and the little guy has just undone his seat belt and is screaming in the back seat with an intensity that I know, for good or bad, I will never feel about anything, ever, for the rest of my life, the best plans and intentions just seem comical, and I’m left to my own devices, and my devices, it turns out, are not so handy in that particular situation.

So now I’m  40, and I have less confidence now than at any time I can remember. But I’m grateful for that. What Dzongsar Jamyang Khyentse says about Dharma is true, but the whole point is that it’s worth it. I sometimes long to be more sure in the world, but I see that my sureness has always been, at least in some important ways, unearned. I’m a beginner, I see that now. And I laugh when I hear childless friends toss around their big ideas about how to properly raise children. What’s more ridiculous than being sure you know exactly how to do something you’ve never done? But that was me. To varying degrees, I think that’s everybody.