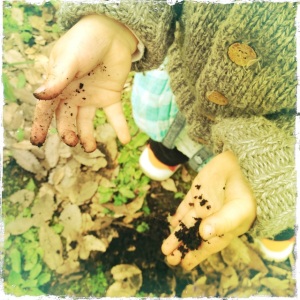 Boy screams “Two hands, Mama!” whenever I’m driving and both of my hands are not firmly fixed on the steering wheel at 10 and 2 o’clock.

The first time this happened was about a year ago. Boy had just turned three, Girl was not yet one. I remember it was raining, really raining—one of those precursor deluges of Japan’s fifth (secret) season. I was moving through that thick mental fog of too many nights doing the semi-sleep shuffle: Baby coughs and shudders—touch baby, baby is okay; baby cries—change diaper, cuddle; baby cries—offer breast; baby whines—cuddle; baby wakes at 4:20 a.m—get up, begin day.

“Two hands, Mama!” screamed Boy again. I put my foot on the brake and shifted my gaze to my son. In the past few months, he’d lost some of the baby fat in his face. He had cheekbones now, a few freckles along his nose, a delicate pointed chin. He looks just like a little boy. Like a real little person.

“Two hands, Mama.” He said it quietly this time.

“Sweetie, I can’t always use two hands when I’m driving. Sometimes it’s better to use one.”

He was right, of course. That is the rule in tea ceremony, in Zen ritual, and in my son’s daycare. Two hands to lift the bowl. Two hands to set it down.

Every day, I am trying to become a Two-hands Mama.

One thought on “Two-hands Mama”