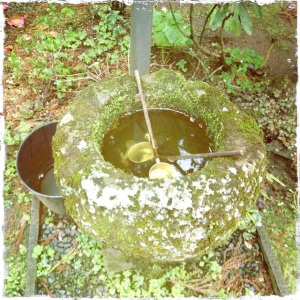 Rikuzentakata. My dream is always the same: A stoic three-story Japanese government building, an expanse of windows reflecting sunlight, clouds, a single seabird tracing across the sky. And then the perspective shifts — I am inside looking out into that blindingly bright afternoon. There is the familiar smell of stale cigarette smoke and paper. I sense others around me, leaning as one into the light coming in from the windows. Breath held in collective pause, no one speaks as sirens wail. I lift my hand, press it against cold glass. A sound — complete and eternal, all swallowed together into one singular moment.

We were driving home to Kumamoto from Nagasaki when the massive earthquake brought the tsunami and the devastating nuclear disaster to Tohoku on March 11, 2011. It was naptime, and Boy slept deeply in his seat as Koun steered our little car past quiet coastal towns, scorched rice fields, country temples, vast urban landscapes, hills and valleys of vegetation on the verge of eruption. My mother was with us — her first trip to Japan — and I was four months pregnant with Girl. At 2:46 p.m. the earth broke beneath the Pacific Ocean, moving the island of Honshu 8 feet east and shifting our planet’s axis 10 inches. We felt nothing.

That evening, we started noticing the messages on e-mail and Facebook — inquiries about our safety, requests for information on the whereabouts of friends traveling in or living in Japan. One thread — about Monty Dickson — caught me. Monty had been Koun’s student at the University of Alaska, and I had met him once or twice on campus. I remembered him well because his head was shaved, like a monk, and his Japanese was impossibly good. A teacher in the JET program, he had last spoken to his fiancée by phone as he was being evacuated to City Hall from the school where he worked. “He’s very welcome to contact us,” I wrote to someone, and gave our telephone number. I could only imagine him to be safe.

It was a day or two before we really began to comprehend the Internet reports of the triple disaster. We read that in Honshu, the U.S. Embassy was chartering flights for Americans to leave the country. We began to wonder if we should leave, too.

I went to work to plan my classes for the upcoming school year, but instead sat for hours watching the foreign news in the university student lounge. The images were devastating— a great tide of water lifting bodies, cars, fishing boats, roofs of houses; and the battered reactors of Fukushima venting clouds of poison into the air. Officials bowed and apologized. I sat in the lounge on a hard chair, rubbing my belly, my back aching, thinking of Boy, and of our unborn child.

In the weeks following the disasters, bottled water and batteries disappeared from store shelves, as these and other resources were shipped north. We were warned of rolling blackouts to maintain the power grid. Monks did takuhatsu along the shopping arcade in Kumamoto, their begging bowls in hand as they chanted. Koun did takuhatsu, too, pulling on long white shin and arm coverings and hiking up his black robes to his knees. A series of lectures he’d been scheduled to give at the monastery in Nagasaki was turned into an event for raising relief funds. Everywhere, signs with Ganbare Nippon! (“You can do it, Japan!”) competed with the usual advertising clamor. Hanami parties were cancelled across Japan – for the first time, I imagine, no families picnicked beneath the ubiquitous cherry blossoms that bloomed and fell away with rain. My bad dreams began and did not go away.

We live on Kyushu Island – same Japan, but a world away from the nuclear disaster that occurred in northern Honshu. Still, Koun and I started thinking a lot about movement: the flow of ground water, ocean currents, weather patterns, the distribution of fresh and processed food throughout Japan. I told him not to drink the water when he traveled to Tokyo, and we selected only local, fresh foods for our meals.

Late in June, I gave birth to Girl. Healthy and perfect, but born into a world with a future we couldn’t yet know, Girl made me grateful. From her arrival until late September, we were bound together, mother and newborn. I slept with my arms curled around her delicate body at night, smelling that sweet, dewy scent. During the days, I put her to breast while sitting on our low couch with my feet propped up on a zafu, this small Zen sacrilege.

When I returned to teaching in late September, a friend at work told me her story of volunteering in Tohoku, how the local survivors put on a festival in Rikuzentakata out of nothing, forming floats from bamboo and found paper. “They were criticized for this, but they said they needed to celebrate something.”

Early in December, radioactive cesium was found in Meiji baby formula. A rush on formula from foreign distributors ensued, and we put in an order to be shipped from overseas just in case. Every three hours at work, I frantically expressed my milk with a machine, always worried that it would not be enough to maintain my supply.

A year ago or more, the Japanese government began pressuring prefectures to accept rubble from the devastated area. “We all must share this terrible burden,” they said, and still say. The radioactive garbage is shipped off to every corner of Japan and awaits burning in piles covered with blue tarps, the smoke from the fires mingling with air. The contaminated ash is buried in the earth. The damaged nuclear reactors of Fukushima continue to poison earth, sea, and sky.

Last October, Koun visited the local monastery to interpret lectures on suicide, the disasters, and zazen for some foreign monks. An organic tea farmer in Kikuchi told the little-known story of an exodus of cultural creatives from Tohoku moving to Kyushu, refugees who hold transient farmers’ markets to sustain themselves in their new lives, far from their devastated homes. “This will change Japan forever — the culture, everything.”

In April 2011, a month after the disasters, Monty’s body was found more than a kilometer from the Rikuzentakata City Hall. I read about him in the local news, and then in the Alaska press. I don’t know why, but I read his story again and again. We knew, and know, so many of the same people, and even today, a photograph of his bicycle — his Facebook profile — appears on the network, recommending him as a “friend.”

Now, as debris from the disaster arrives on the shores of the U.S., poignant photos circulate — in Oregon, the arch from a red Shinto torii stretched out in the sand; in Alaska, a soccer ball; in Hawaii, a fishing skiff; in Washington, a dock. I fear that people view these photos only as curiosities or as elegy, tributes to the fallen. And they are both of these things, yes — a testament to the flow of water across great distance, a cross by the side of the road. But the repercussions from this disaster have yet to be measured. This narrative will expand deep into the future, far beyond our possible imaginings. We all carry the weight of it.

As for Monty, I can’t stop thinking about him, or my dream of his passing. Sometimes, I come across a new detail about that day, and this feels important, as if it will help me to understand the incomprehensible. Last week, I learned that at 2:46 p.m. on March 11, 2011, it was snowing in Rikuzentakata.

4 thoughts on “The Weight of Earth and Water”