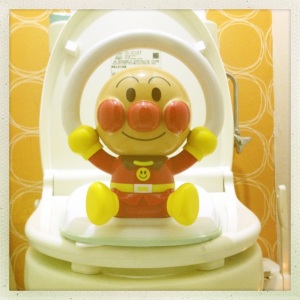 Now that my second child, Girl, is nearing two years of age, this is exactly what I’m thinking in terms of potty training. Just. Effing. Bring. It. I have seen it all; I am prepared for anything.

With Boy, Koun and I thought he should be ready for this particular milestone pretty early on. The conversation went a lot like this:

“Gosh, that seems like a long time to wait. Surely it’s sooner than that?”

(OK, bear in mind, neither of us had had, well, any prior experience with babies. We also hadn’t slept in three weeks.)

Then we discovered a vast body of parenting literature that advocated for everything from “right away” (really?!) to “whenever the child expresses readiness — at least by around five years of age.” FIVE YEARS OF AGE? I will be practically old by then, I thought. (Sigh, that was over four years ago.)

So we (sort of) split the difference and began our potty-training efforts just after Boy’s first birthday — if “started” is the right word. We ordered Elmo’s Potty Time from the States and proceeded to watch it on and off with Boy, ignoring the AAP declaration that screens be banned “for all children under two.” (Yes, I was riddled with guilt — the experts nowadays seem to advocate a constant state of this. Just have a look at some popular child-rearing books, or pay attention to the various pediatric organizations. Rest assured, parents, you’re basically doing everything wrong. More on that later. . .)

And then we bought an overpriced Anpanman potty from our local Toys R Us. We let Boy pick it out — naturally he gravitated to Japan’s cutest toddler-sized superhero. The potty was AWESOME, a convertible number that could be used on the big toilet, or as a stand-alone. There was a bright pee-colored cloth seat cover — perfect for the cold winter months. And three buttons on the jolly bean-filled-breadbun-inspired face played the cartoon theme song and adorable catch phrases — great for entertaining the child while he waited for that “gotta-go” feeling to overtake him.

Once we got it home, Boy did not like the potty — at least not for using it as it was intended. He LOVED playing with the thing, though, dragging it around the tatami and pushing at those buttons over and over. (That is probably the single loudest toilet I’ll ever encounter — though, this is Japan. The birthplace of the Toto Otohime, or “Sound Princess.” So, you never know.)

Sometime after that, for a brief period, bathing with our son in our Japanese-style shower/bath became an adventure in defecation — not, Will he or won’t he?  But, How big? And, Where? We swore off family onsen for the time being. It was not long after that when we all contracted norovirus, the intestinal bane of cruiseships. We found ourselves —  Koun and me — hooked up to IVs for a couple of days, and then Boy for a full week. (I will not write the full description of how we wound up in this predicament. But know that it was ugly. So very ugly.)

As he moved toward the ripe old age of two, Boy still hadn’t gotten the hang of it, and we wondered if potty training —  much like language learning —  has an optimal window, and we’d missed it. Completely. Our child would never be fluent, and we’d be out millions in diapers.

We started blaming the potty. So we bought another one. And then another one. We had a real collection going there for a while: A putty-colored stand-alone with handlebars, just like the potties used at our kids’ daycare. A convertible ladder-type dealio in primary colors. A plush Lilo & Stitch toilet topper for itty-bitty bums. Boy rejected all of them, in the end deciding that he preferred sitting on the “big people’s potty,” just like Mama and Papa.

We began talking about all things toilet with Boy, mostly as a way to get him excited about using the potty. And for the first time in my near-decade of living in Japan, I began to appreciate the weirdly adorable poop cartoons in public toilets politely requesting patrons to keep things neat and tidy. (Unko-san goods, in case you were wondering, are also widely available for purchase here in Japan — the perfect gift for all ages!)

When Boy was about three, we introduced the “Potty Present Box.” Perhaps the name explains it all — make a deposit in the toilet, get a present from the box. It seemed like a good idea. We had some success, but then we started getting re-gifted for our own good works.

Lately, Boy has it all under control, but his humor has turned to the profane: unchi and oshikko (“poop” and “pee”) punctuate many (most) of his sentences. It comes up a lot at the dinner table. We have only ourselves to blame.

Meanwhile, Girl has become fascinated with the potty — ONLY the big one, of course. She has taken to announcing her desire to “pee-pee,” stripping completely naked, asking pointedly for company, then sitting cheerily on the toilet for a very, very, very (very) long time. She does not urinate into the bowl. But I think she’s getting the alphabet song down pat.

I used to have a shy bladder. I’ll admit it. I didn’t especially enjoy using the potty in the company of others—and I certainly never did so in front of others, as a kind of display. Now, each W.C. visit is social, and a teaching moment. How many times in the past couple years have I sat on a toilet with a child sitting on my knees, or holding my hands while singing the full Totoro soundtrack, or sliding the lock open while I clutch to no avail at both child and door? Too. Many. Times.

Sometimes, this communal business really does go too far. To illustrate: While visiting California’s illustrious Stanford University this past summer, Boy and I felt the call and we quickly located a public bathroom. I have no doubt that my son’s loud assertion deeply traumatized those in the neighboring stalls: “Mama, you pee out of your butt!” Thanks, Boy. You keep me humble.

I have to say that, overall, I’ve learned a lot from this particular journey with my kids. For instance, I learned that it’s possible to pee on one’s own face — in fact, it’s a likelihood for boys. It’s also possible to fall into a (poo-filled) toilet, even if one appears too big physically for this to happen.

My biggest take-away, though, is that there is very little that Koun and I can control in this process. We can’t force it; we just need to create opportunities for practice and be prepared (with wet wipes) for anything to come.

So go ahead, Girl, show me what you’ve got.