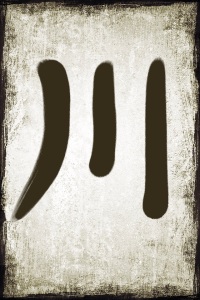 Kawa. The kanji for “river” is a simple, elegant ideograph comprised of three downward strokes that suggest the flow of water wending its way over a bed of earth and stone. This character is also the configuration of many a sleeping arrangement throughout households in Japan: the father, the mother, and the child nestled between.

We have always slept within arm’s length of our children. But before applauding (or crying foul on) our parenting philosophy, know this: for families with children in Japan, “co-sleep” is more commonly referred to as “sleep.” There are perhaps some subtle cultural reasons for this, but our nightly accommodations have not been so much choice (the American way, the Japanese way) as common sense. While living in Kumamoto without the benefit of central heating or insulated housing, sharing space at night became obvious.

That said, we were initially eager to establish our kids in their bedrooms here in Canada, in our new home. It seemed like good timing. And save for the occasional upset, Boy is now content enough with this different way. Girl, however, appears in our room nightly. We frequently wake to her small form gently snoring between our bodies, and the two of us realize later that we hold no memory of her heroic climb and the conquering of the bed (all of the bed) between us.

As Girl has made a palpable linguistic shift from dominant Japanese to dominant English in the two months since changing countries, so has her sleeping character. Lately, it’s more “H” than “kawa.” Our occasional nightmares of falling may become reality without the grounded security of traditional floor sleeping. Often her heels or head or elbows or knees dig into my body (and dreams). I always sport at least one invisible bruise against the ribs. Needless to say, I am not an overly well-rested Mama.

Still, there is this: At daybreak this morning, I awoke briefly to witness Koun slumbering soundly after a fitful night of Girl. She slept with her nose inches from his, her breath blowing sweetly into his breath, her tiny hands loosely clutching his face.

Girl will learn to sleep through the night in her own room. It will happen; I have no doubt. But it turns out I’m not as eager as I first thought. After all, time is a river, too.

4 thoughts on “Sleep Is a River”